As I write this, we are kitten-less. It seems odd to go back to having just our two cats – the fat one and the noisy one!  Sisu and Siiri left for their new home on Thursday morning, so are presumably all settled in by now.

The week leading up to their departure was a fairly normal one. They seemed to recover from their operations in next to no time. The little overall we made for Siiri only lasted a few days. Between them they managed to fray up all the ribbons that fastened it, and after Siiri appeared one morning without it (we found it in the living room, inside-out with all the ribbons still tied) we decided it was probably as well to leave it off. Her wound had healed up nicely, and other than an initial attempt at cleaning she left it alone.

Both kittens were as crazy as ever, which attests to their quick recovery. Siiri was frequently balancing on the top of the living room door, and Sisu continued to bite our ankles when he was hungry. They continued to race along the “cat highway” that the top of our bookshelves form. On one particular occasion Sisu was bombing back and forward so quickly that he at one point slipped, somehow managed to continue running even with his right-side being completely in thin air, and finally fell off completely to land on the sofa. He looked a bit ruffled for a moment, his skinny little tail puffing up as much as he could manage (making it look like a normal cat’s tail…) He was back on the highway fairly soon though, so I don’t think he was too bothered by the event. It certainly didn’t teach him to slow down!

Sisu actually turned quite cuddly towards the end of their time with us. He would frequently jump up onto my desk and wait for me to move him onto my lap where he would curl up purring. There were a couple of times when Lola was trying to get on my lap (a rare happening; she’s generally not a lap cat) and this little grey flash would appear on the desk, pushing past her onto my lap, much to her annoyance.

Siiri continued to be cuddly with Elvis, but not so much with people. She was always quite reluctant to be held or cuddled. She put up quite a struggle when we clipped her claws before they left! But she was more than happy to snuggle up beside Elvis to lick and be licked. It was very sweet to see them cuddled up together, with his front legs curled around her. I wonder if she misses him now… It seems likely. He doesn’t seem to concerned by her absence, but maybe he’s just good at hiding it! 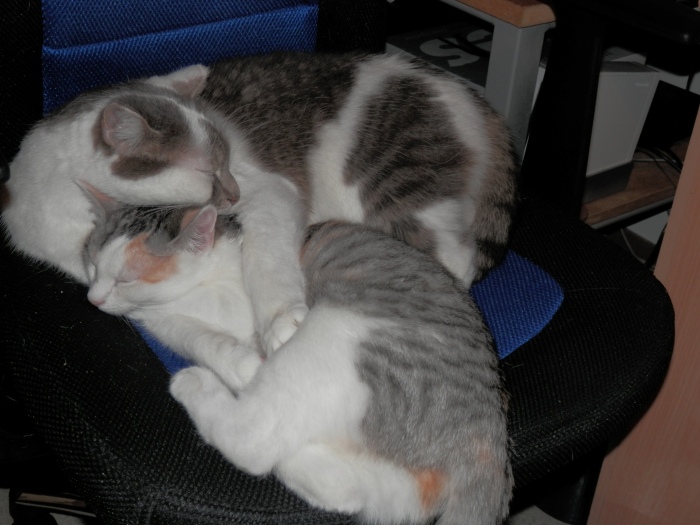 Perhaps we’re imagining it, but since the kittens left Lola seems to have become noisier. I’m not sure that she misses them; she barely tolerated their presence. Perhaps she’s feeling more comfortable being herself now that they are gone. Is it bad of me to wish she would be a bit less herself? She really can be very loud, and it’s not fun when we are trying to sleep!

Another thing we’ve noticed since the kittens left is just how hefty Elvis is. I think he must have been clearing up any food that the kittens left. He’s always been a big boy, but he seems to weigh a ton now! He’s never been very interested in toys (not even the laser pointer) so it’s very difficult to get him to exercise. When we get back from our holiday in England we’re going to have to come up with something to persuade him to move around more. And keep a better eye on his food intake.

Fostering is over for the year. It was certainly an experience that I’d like to repeat. I’m not sure how soon we’d get our next lot of fur-babies, but being that we would be approaching the beginning of the kitten season, I’m wondering if we’ll end up having even tinier kittens next time..! I’d love the opportunity to care for the tiny babies. But we shall see what happens.