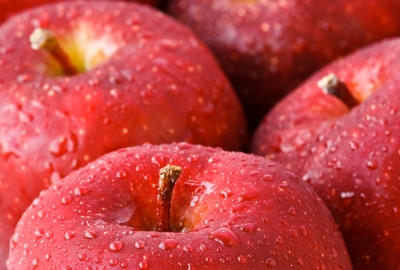 I’ve never actually seen shop-bought apple sauce, so perhaps that is more pleasing to the eye, though I doubt it. Homemade apple sauce has a greeny-brown colour, and a texture similar to that of baby food.

Perhaps I’m underselling it though. My descriptions thus far are no doubt making you, the reader, wonder why on earth I would deign to make or eat such an unappetising thing. That was not what I intended… I just wanted to explain why I have used a stock image (from FreeDigitalPhotos.net) rather than one of my own. And as I said, the reason for that is because apple sauce is not photogenic.

I did think that I could have taken a picture of it adorning some icecream, or swirled onto porridge, but I didn’t think of that until after we’d used all of it.

So, instead, you get this beautiful apple picture, seen above. There again, I could have photographed some apples myself, but we used them all…

I’ll do better next week, I promise. It’s just we’ve been ill, and unpacking suitcases, and…

But you’re not hear to listen to my complaining. You are here to see my recipe. So, here goes.

Edit 3.7.12: Incidentally, this apple sauce recipe is for what Americans call apple sauce, which is similar to what we Brits would call stewed apples. English apple sauce tends to sharp, rather than sweet, and as such is made with acidic apples such as Bramley. I’m sure adapting this recipe to make British apple sauce would be easy – simply switch from sweet apples to acidic. And you’d probably want to skip the cinnamon/vanilla too.

Source – a conglomeration of SimpleBites and PickYourOwn

Servings – Depends on quantities used. Based on what we got, use twice as much weight of apple (pre-coring) as you require applesauce. If that makes any sense.

Time – Took about an hour, no doubt varies based on quantities.

Apples – use sweet apples, ideally more than one variety. We used Gala and Red Delicious.

Liquid – we used apple juice, plus a little water. You may also choose to use cider if you wish.

Cinnamon stick/vanilla/other flavours, optional – one of the source sites suggested that if using for baking you don’t need to add any flavourings, but we added some cinnamon anyway.

Wash your lovely shiny apples. If you wish, remove the skins. We left them on. The skins are the best source of nutrients, and hold a lot of the flavour. If you leave them on, you will need to remove them from the mixture later.

Quarter and core the apples.

Place the apple segments into a large, heavy bottomed pot. Add liquid. You’ll need something like 1 cup/8 fl oz/ 240ml liquid for every 5lb/2.25kg apples. The recipes I used as sources seemed to be making large quantities, but it’s not too hard to convert down to less.

Throw into the pot whatever flavourings you are using. We chucked in a cinnamon stick.

Put the pot on to medium heat, and partially cover with a lid. Bring to a simmer, reduce heat to medium low, and allow to cook slowly. Stir occasionally to prevent sticking. We had to add a bit more liquid at one point, but that may have been because we made such a small amount.

Once the apples are lovely and soft and squidgy they are ready! If you left the skins on now is the time to remove them (unless you have a food mill, which apparently will do that for you somehow). Don’t forget the mixture is hot, so do be carefully. Depending on the texture you want your applesauce, you should now mash it up with a potato masher, stick it in a blender or foodmill, or (as we did) pass it through a fine mesh sieve using the back of a ladle.

If you like, you could put the purée back into the pan and cook it down some more, which would result in apple butter. Otherwise, you’re finished! You can choose to jar ’em up, or just stick it in a pot in the fridge like we did. I believe it can also be frozen. I’m not entirely sure how long it lasts in the fridge/freezer, but if you jar it up you can practically keep it forever. Practically.

And that’s it, apple sauce – done.

What can you use this intriguing substance for, I hear you ask? Well, it has many uses. It can be used in baking (watch this space, next week we’ll be posting a muffin recipe that contains applesauce), you could also use it with icecream, mixed into yoghurt, even eat it on it’s own as a simple and healthy pudding. You could also eat it with a savoury dish. We baked some up with a couple of chicken breasts, which was yummy, though of course pork would be a natural partner to apples. (Edit 3.7.12: as mentioned above, you can make ‘savoury’ apple sauce, in the manner of the English, with acidic apples instead of sweet.)

Do try it, it’s quite easy to make, and smells delicious as it cooks.

And cookies to anyone who can manage to make applesauce and photograph it attractively.